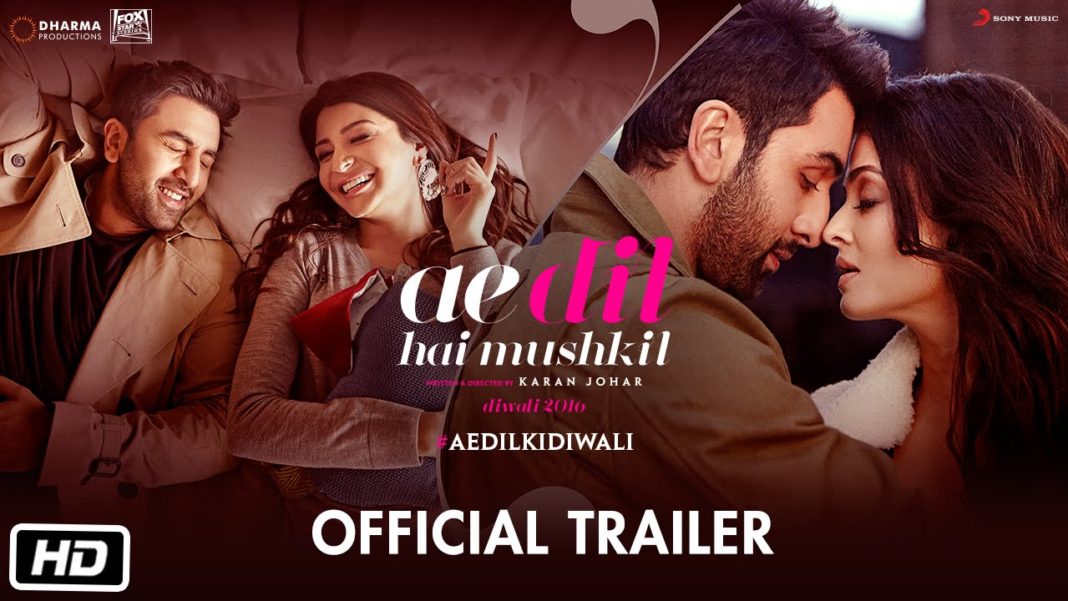 Karan Johar film Ae Dil Hai Mushkil which shakes the internet with its title track has reportedly failed to reach the expectations of the audience. Karan Johar ADHM starring Ranbir Kapoor, Anushka Sharma, Aishwarya Rai and of course Pakistani actor Fawad Khan finally hit the screens all over the globe with a massive release.

Want to know Ae Dil Hai Mushkil Review, Story, and rating. Why are you still waiting? Just go through it. If you get top notch actors what you can do? Undoubtedly everyone used them in a better way, but popular filmmaker Karan Johar failed to use the top class actors with ADHM.  You can’t get a better cast like Ranbir, Aishwarya Rai, and Anushka. However, Karan Johar mixed the film with old Bollywood references and missed the freshness in the romantic love saga.

Finally, Ae Dil Hai Mushkil looks like old Bollywood wine. When you watch the KJ film, you meet the beautiful people, lovely foreign locations, feel good songs, romantic love scenes, etc. But in ADHM you missed it a little bit. Viewers said that the most awaited romantic saga has lost the connection with its core and mainly focuses on rich cinematography and melodrama.

Karan showed the film in a most beautiful way. This is a glossy love story with top notch star cast, gorgeous locations, and superb songs. A major part of the film shot in Paris, Vienna, London, and Lucknow.

The main plot of Ae Dil Hai Mushkil story is unreturned love. ADHM is Alizeh (Anushka Sharma) and Ayaan’s (Ranbir) story and the chemistry between those has come up well on silver screen. Karan Johar crispy direction and rich cinematography took the film to another level. ADHM looks like a 2016 Kuch Kuch Hota Hai. Ranbir Kapoor simply nailed it. His performance was top notch and mind-blowing. You hadn’t seen Ranbir in anything like this before.

The director Karan has given major screen space to Ranbir and Anushka, and they didn’t spoil their roles. Saba (Aishwarya) is a divorcee poetess who meets a heartbroken Ayaan and falls in love with him. Aishwarya as Saba did a good job and justice for her role. She is sexy, smart, independent and a great sense of self-importance.

Ae Dil Hai Mushkil Trailer and ADHM songs had got a lot of appreciation from the audience and especially title song of Ae Dil Hai Mushkil is the best pick for all. Music plays a vital role in the film. Pritam has given a peppy beat to ADHM.

The first half of the film shot beautifully with a few heart touching dialogues and mesmerizing locations. Second of is little bit drag and fuzzy.