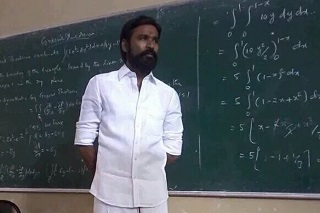 Kollywood star Dhanush is gearing up to release his upcoming film Kodi directed by Durai Senthil. Dhanush has nice bonding with the director and the duo was teaming up for the third time after two successful films. Kodi is a political drama written and directed by Durai Senthil. Actor Dhanush will be seen in a dual role and fans are eagerly waiting for the film. Now Latest update is that Kodi Audio Songs will be directly releasing into the market today.

The team has been recently released Kodi first look posters and they got a stunning response. Dhanush fans are eagerly waiting for Kodi Audio and here it is. Dhanush Kodi Audio songs and complete Kodi Audio Track List have been released. Santosh Narayan of Kabali fame has given a wonderful music. Few hours back actor Dhanush took his twitter and posted the full track list of Kodi.

Sony Music South grabbed the audio rights of Kodi movie and the album has five songs. Popular singers Chitra, Arunraja Kamaraj, Dhanush, Shwetha Mohan and Shankar Mahadevan have lent their voices. Starring Dhanush in a lead role the movie features Trisha and Anupama Parameswaran in female lead roles. Talented Maari actor will be seen in a dual role one is teacher role while another one is a Politician. The first look of Dhanush from Kodi has been released already and he looks terrific and Massy in Politician avatar.

Now, Kodi Audio mp3 songs were released and it will be available to download. Here is the Kodi Audio Tracklist for you check it.