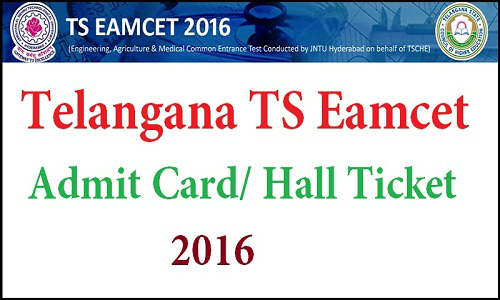 The students can download the TS EAMCET 3 Admit Card 2016 from the official website www.tseamcet.in for the exam.

For the second or for some the third time they are giving the EAMCET examination. It is know that in the past the EAMCET exam paper got leaked and the Telangana State government has taken the decision to go for the re-conduction of the entrance test.

This year the students are completely in the state of Unclear and dilemma as there was a lot of drama regarding the entrance tests into the professional courses of Engineering and Medical. The NEET for the first time was introduced for which both the Telugu states were not fully prepared and there was a lot of confusion.

By some how the problem got solved for this year and along with the NEET, the State governments were allowed to conduct their EAMCET tests. The tests were conducted and suddenly, a news of leakage erupted in the Telangana State and the government has to go for re-conduction of the test.

Now, the EAMCET 3 in 2016 will be deciding the fate of many students who are willing to join the professional course.

TS EAMCET 3 Admit Card 2016 will be made available to the students online on the official website from Sep 3rd onwards. The students need to check the site regularly in this regard.