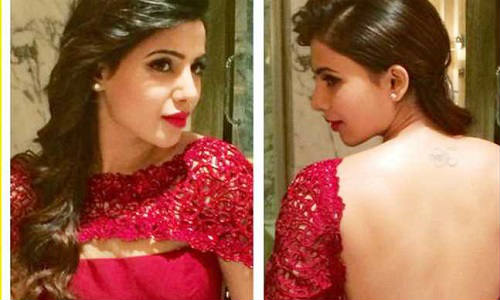 Almost all the users has fixed up their minds that Samantha will be marrying Naga Chaitanya very soon. But it is not confirmed by any one till date.

Samantha Ruth Prabhu is in news all these days for different twists and turns regarding the news of her marriage with Naga Chaitanya. The matter regarding them has taken many turns and now the news is that the heroine is not marrying Naga Chaitanya this year.

But there are chance of their engagement. it is heard that Naga Chaitanya and Samantha will get engaged on September 23rd of this year. in the mean while the actress is getting a new tattoo printed on her body by the time of engagement. Already the actress has a tattoo by name “YOU” on nape and now the new one. There were many rumors regarding her locket too. Th locket has the word “N”. Na stands for Naga Chaitanya?

On many occasions, the heroine was asked about the same but she never revealed the name of his future life partner. Till date none of the actors has openly declared regarding the relationship amongst them. Without the confirmation only they are seen in public places together spending some private moments of their busy life.

The news is that both of them are in love right from the starting of the film “Yem Maaya Chesave”. But they have just dragged the time till date. They have never openly commented on the relationship between them.

Let us wait and watch as what Tatto will be appearing on the beautiful body of the actress and when will the duo get tied up with the marriage knot.