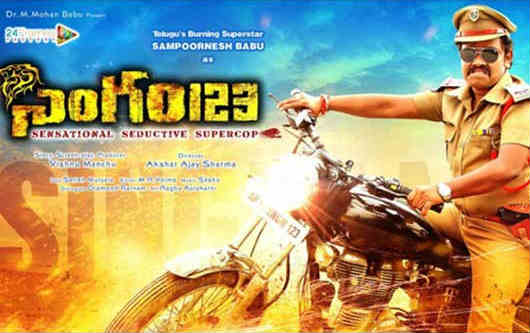 Directed by Akshat Ajay Sharma and Presented by Dr Mohan Babu, Singham 123 came up starring Sampoornesh Babu, Bhavani in lead roles for which the Tollywood movie is marked for its action and comedy on big screen. Manchu Vishnu penned the story, screenplay. He produced the film on his production house 24 Frames Factory for burning star Sampoornesh Babu who had his previous hit from “Hrudaya Kaleyam”.

Sampoornesh Babu, after a hit from Hrudaya Kaleyam has a great association of fan following. Now he came up with a project where he plays the role of a tough cop in the film, Singham 123. For a mafia don named Lingham in a village, the cop is assigned the task to arrest. The comedy of Sampoo is sensational and seductive. His action is the highlight of movie. Comedy scenes and punch dialogues are directed in the best that audience can expect from the Burning Star. The movie on big screen has garnered tremendous attention from the viewers. His mannerism and dialogue delivery attracted people towards the theaters. Dialogues from Mahesh Babu, Jr. NTR and Balayya films are taken and delivered in this film as punch dialogues.

Cop (Sampoo) with an entry of Allu Arjun’s Race Gurram will enter the screenplay on a mission to arrest mafia don, Lingham in a village. Previously many police men tried but couldn’t arrest him, now the new cop on his journey as a police should arrest the don and the film is all about how he does the way.