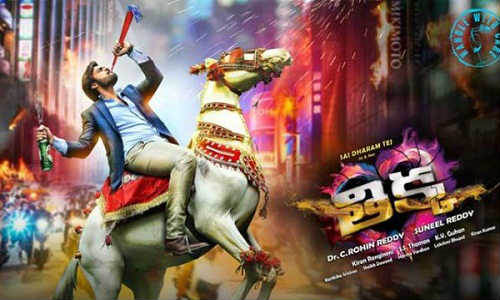 Sunil Reddy directed Thikka Telugu movie review is presented here for our viewers. The movie is released today in the theaters.

Sai Dharam Tej starred movie Thikka is released in both the Telugu speaking states – Andhra Pradesh and Telangana. The latest movie is a Action and romantic entertainer. The movie has all the commercial elements. Previous movie of the Tollywood star has performed well in the theaters and this movie has also started with good openings.

“Thikka” has been produced by Dr. Rohin Reddy under the banner Sri Venkateswara Movie Makers. Sunil Reddy directed movie Thikka has a good opening at the theaters. The previous movie of the hero were hits and the impact of the same is depicted on the openings of today’s movie too. Mannara Chopra is the main female lead role player in this movie and the other characters in the movie are additional for the success of the movie.

Sheik Dawood has written the story and screenplay. Both the responsibilities have been tackled well and the result of the movie is very good. The editing responsibility is taken up by Karthik Srinivasa. story is written by Lakshmi Bhupal while the dialogues are penned by Harsha Vardhan.

Cinematography has been handled by K V Guhan. Thaman is the music director of the movie.

The movie revolves around the love story of Aditya (Sai Dharam Tej), who allows his two friends to help him deal with a nasty breakup. How they try to party their way through it forms the crux of the story.

Ramajogayya Sastry, bhaskarabhatla and Neeraja Kona has written the lyrics for the tracks that are composed by the music director S Thaman.

The speciality of the music lies in the singing part. Kollywood superstars hero Dhanush and Simbhu, MC Vickey has sung the songs along with Usha Uthup, Simha and Revanth.

Sai Dharam Tej, Larissa Bonesi and Mannara have done justice to their roles and their performances and chemistry are the highlights of “Thikka.” Rajendra Prasad, Rao Ramesh, Ali, Posani Krishna Murali, Ajay, Vennela Kishore, Thagubothu Ramesh, Mumaith Khan and Sapthagiri’s performances are said to be the assets of the film.