Paris Stands With London, By Dimming Eiffel Tower From Midnight 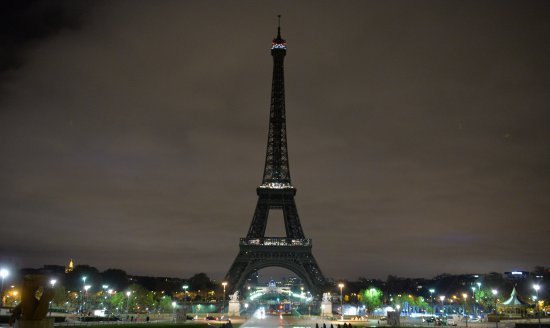 Paris Stands With London, By Dimming Eiffel Tower From Midnight: Lights on the Eiffel Tower will be switched off at midnight (2300 GMT) on Wednesday in solidarity with those killed and injured in a terror attack on Britain’s parliament.

Paris Stands With London, By Dimming Eiffel Tower From Midnight

People look at the Eiffel Tower illuminated in the French colors in honor of the victims of the attacks on Nov. 16, 2015. At midnight on Wednesday, March 22, 2017, the Tower will go dark in solidarity with those killed. And hurt in the terror attack on the British parliament. The attacker then attempted to storm into Parliament before being confronted by a police officer and named this evening as Keith Palmer.

Paris Mayor Anne Hidalgo took the decision following the deadly attack in which a man ploughed his car into pedestrians. On London’s Westminster Bridge then leapt out and stabbed a policeman, killing three people and wounding more than 20.

Hidalgo had earlier expressed her “solidarity” in a message to her London counterpart Sadiq Khan, adding. “Paris and London have very close links which have become stronger in the last few decades.”

She said the two capitals “share a common love of freedom. And an attachment to democracy” and were “tolerant and cosmopolitan cities, open to the world.”

A car ploughed through a crowd of people on Westminster Bridge shortly after 2.30pm this afternoon, killing at least two. The car, a gray Hyundai i40, then continued down towards Parliament before colliding into a gate.

The attacker then attempted to storm into Parliament before being confronted by a police officer, named this evening as Keith Palmer.

This officer has fatally stabbed while stopping the killer, who was then shot dead.

Click Here to Get All Latest News Updates Across the World