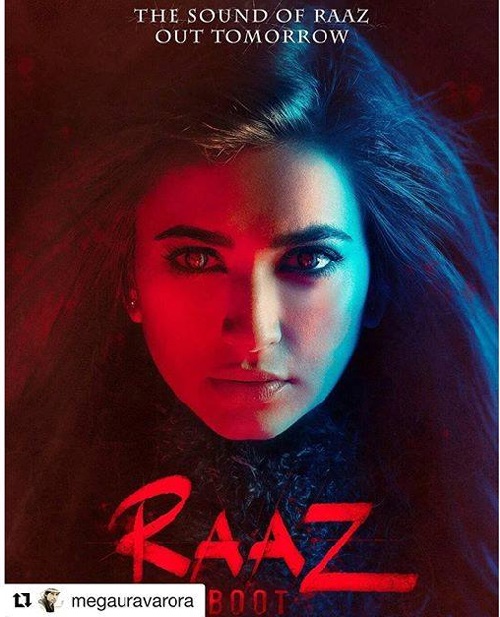 Super hit Raaz series is coming up with one more sequel. Kriti Kharbanda in Raaz Reboot First Look revealed by the makers today.

Kriti Kharbanda who got a nice chance with Pawan Kalyan in Teen Maar is currently free with no movies in hand. Even though Kriti got a good opportunity with Teen Maar movie, she has not got good chances. After her sexy avatars too failed, she played a role of a sister in Ram Charan’s Telugu movie Bruce Lee directed by Srinu Vaitla. Unexpectedly, Bruce Lee also not performed well at box office. Now she got a big offer from Bollywood. She will be seen in Raaz 4th version Raaz Reboot. Today makers have released Raaz Reboot First Look.

Unlike Tollywood big actresses like Tamanna, Trisha, and Kajal, Kriti Kharbanda got a bumper offer for debut film in the form of Raaz sequel. Tomorrow Raaz Reboot official Trailer will be out and here is the first look poster of Kriti in Raaz 4.

Emraan Hashmi is playing a lead role and buzz is that she has also acted in few kissing and intimate scenes with the actor. So we expect a lot of hot scenes in Raaz 4.