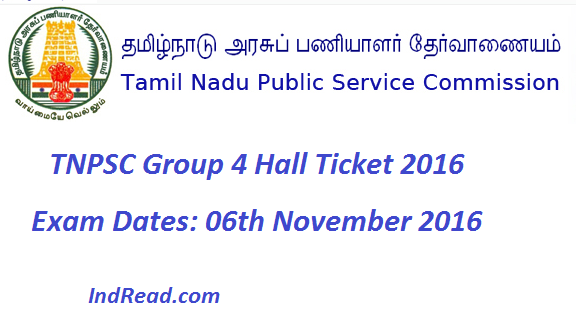 A massive number of candidates who are searching for government jobs in Tamilnadu have applied before the registration dates closed. TNPSC is going to release the Tamilnadu PSC Group IV Exam Admit Card soon, so candidates have to stay tuned to the official website tnpsc.gov.in.

It was established in the year 1929 as a constitutional body for the purpose of recruiting skilled candidates in various government departments. Recently the Commission has released the notification regarding 5451 vacancies for Group IV vacancies and completed the registration process.

Candidates who have applied are eagerly waiting for the release date of TNPSC Group 4 Call Letter. The admit card will be soon disclosed, so all the applied aspirants can prepare well for the exam without wasting time as the exam date was scheduled on 6th November 2016.

The TNPSC Group 4 Hall Ticket 2016 is a document to carry for the exam centre and also candidates have to carry mentioned ID proofs. After all the frisking process, candidates are allowed to enter the exam hall to write the exam. For this Group IV recruitment, the competition will be more, and hence applicants have to prepare well by referring the previous question papers.